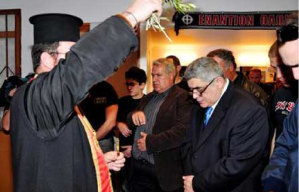 In the recent Greek parliamentary elections on June 17, the nationalist “Golden Dawn” party, has managed to score an enormous 6.92%, mainly spurred by financial fear and deep disillusionment with mainstream politicians (previous score 0.29% in the last 2009 elections ), electing 18 deputies. This is a party openly praising the former Greek military regime leader Papadopoulos (1967-1974), its member’s practice the Roman salute.

Ilias Kasidiaris, the Golden Dawn’s party spokesman, recently slapped a left woman deputy and threw water in the face of another on live television which was diffused worldwide, he then managed to disappear and hide for two days in order to avoid an immediate trial. A Few Days Later, Kasidiaris Presented to The prosecutor himself Asking permission to Bear Arms, Accompanied by Bodyguards and A Priest .

The High Electoral score of The Golden Dawn in The Greek PARLIAMENT 2012 after May Elections, attracted interest of The President of The European COMMISSION Jose Manuel Barroso (Bilderberg) who “ … The EU warned That COMMISSION Will Not hesitate to Use All Mechanisms available to Act Against Those Who insult community Law and Fundamental Human Rights The charter ”.

The Orthodox Church of Greece, is a Church which has been justly accused for its close ties with the former military Junta regime (1967-1974), an official national-state church institution that defiantly surpasses Greek legislation.

Priests often rally in favour of Golden Dawn in churches (Saint Andreas of Kato Patissia, Archdiocese of Athens, from newspaper ‘Avgi’ 30 March 2012). The Golden Dawn HIS Leader paid respects to the Metropolitan Seraphim of Piraeus bishop formally by visiting HIM his at diocese headquarters to discuss The “ Immigration problem ”while Offering HIM as a Gift, A Holy Virgin Mary of icon. Metropolitan bishop Ambrosios of Kalavryta backed and praised the nationalists. Even Archbishop himself, Ieronymos, offered his blessings in Parliament, to the Leader of Golden Dawn spreading him with Holy Water. The Churches’ S Head Hierarchy Remains an indifferent, Neutral to The Daily Spectator Violent pogrom Unleashed by The Golden Dawn Against Those That Once Named Christ himself, Foreigners and Immigrants HIS “ Least Brothers ”. Please Note That The FACT The Golden Dawn MPs appeared at The inauguration of newly elected The Parliamentary session of The Last Elections , accompanied by an Orthodox Priest. Even the Greek bishop of Argentina Tarasios of the Ecumenical Patriarchate, was present (September 2006) as a defence witness in the trial of a member of Golden Dawn Antonis Androutsopoulos, fugitive for eight years (unanimously sentenced to 21 years imprisonment, the penalty was reduced to 12 yrs. in 2009) for a homicidal attack on a student named Christos Kousouris (June 1998).The Conservative recently Athenian Newspaper “The Paron” (the 13th th May 2012) revealed (Without Any reaction from The Church) That Many Bishops voted Golden Dawn and “Feel Proud for it”.